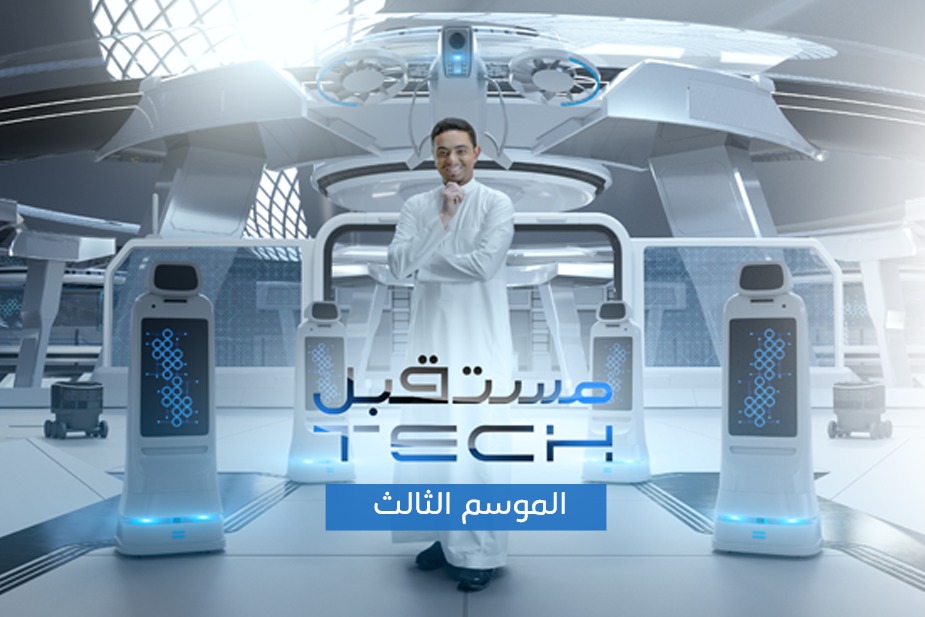 The third season of “Mustaqbal Tech” started in September 2022. The show is produced by the Saudi Broadcasting Authority (SBA) and broadcasts on the Saudi SBC channel . MENABloom continues for the third season to provide the pre-production content services that covers script writing, media collaborations, interviews, events coverage and paid partnerships opportunities.

“Mustaqbal Tech” presents the latest technology trends in a simple and interesting approach. It covers everything important to technology lovers, particularly in virtual and augmented realities, video games, smart cars, and communications networks, in addition to conducting reviews of consumer products and the latest announcements in the Saudi market, and those that are about to be announced.

The show not only presents the new products, but also helps its audience understand modern technologies, their advantages, and their use. It also shares advice and guidance to protect themselves and their children from some of technologies’ disadvantages.

The presenter of “Mustaqbal Tech”, Abdullah AlSabea, won the Favorite Influencer award at Joy Awards 2022, and he is a significant technology expert on social media platforms with millions of followers.

The third season of the show is characterized by a set of additional segments and special content that enrich its experience and meet the audience’s expectations, including:

– Discussing how to gain profits from the modern technology world, such as digital currencies and e-commerce

– Rich content that deals with the latest technology products in your home, such as computers, mobile phones, Virtual Reality, and video games

In its second season, “Mustaqbal Tech” achieved wide success, with an average of 750,000 views per week on television, and hundreds of thousands of views and interactions on social media. This was achieved through its content that has a variety of interviews with prominent officials at the most influential technology companies, major coverage of tier-1 technology events, and practical reviews of modern devices.

In the third season, Abdullah AlSabea will meet with senior technology leaders in giant tech companies. Among the top interviewers were:  Global Head of Engineering Partnership Sector at META, Vice President of Communications at Expo 2020 Dubai, and the General Manager of Twitter Middle East and North Africa in Saudi Arabia, Amazon’s Vice President in MENA, Product Manager at Oppo MENA and Marketing Director at Oppo Saudi Arabia.

The show’s team works on covering expanded technology events and summits locally and internationally. One of the most important events that the show previously covered was the LEAP conference in the Saudi capital, Riyadh, which was the largest international technology conference. During LEAP22, Abdullah AlSabea took a tour inside the exhibition and highlighted investments of billions of Dollars in digital initiatives. He also met with the Vice Minister of Technology at the Saudi Ministry of Communications and Information Technology, and the Deputy Head of Business Sector at STC.

The show also covered Expo 2020 Dubai, where the team visited Saudi Arabia’s pavilion – the largest of the Expo’s pavilions – and Abdullah AlSabea presented an overview of the pavilion’s sections, its activities, and what it offered to its visitors. He also showed the “House of the Future” in the US pavilion, which is one of the latest trends in smart homes around the world.

The most preferred segment for most of Mustaqbal Tech’s audience is the product reviews where we present the latest tech products and gadgets, introduce its features and key selling points. Among the most prominent products that will be reviewed are smartwatches, foldable phones, HomePods, Augmented and Virtual Reality glasses, and the additional accessories that make the use of products easier and provide many advantages in both the business and entertainment communities. To make this happen, MENABLOOM  collaborates with major technology companies and social networks, including META, Twitter, Oppo, LG, and Lexus.

MENABLOOM supervises all production stages of the “Mustaqbal Tech” show in its third season, as it did in its second one, starting from developing episodes ideas, selecting topics, coordinating the segments, supervising the logistics preparation, communicating with companies and guests, and working on its social media campaigns.

MENABLOOM plays this role with great experience in media production and digital marketing, using the latest production technologies and the best methods of developing episodes’ scripts. It incorporates the latest high-quality visual elements to make a qualitative leap in the show’s position on the Arabic shows’ map to attract more viewers The aim of this is to achieve greater awareness of technology information in the Arab world and to contribute to digital literacy efforts.

Feel free to contact us if you need further information : contact@menabloom.com

How to Cover Events on Social Media?

88% of marketing professionals admit to using social media in all aspects of event management,...